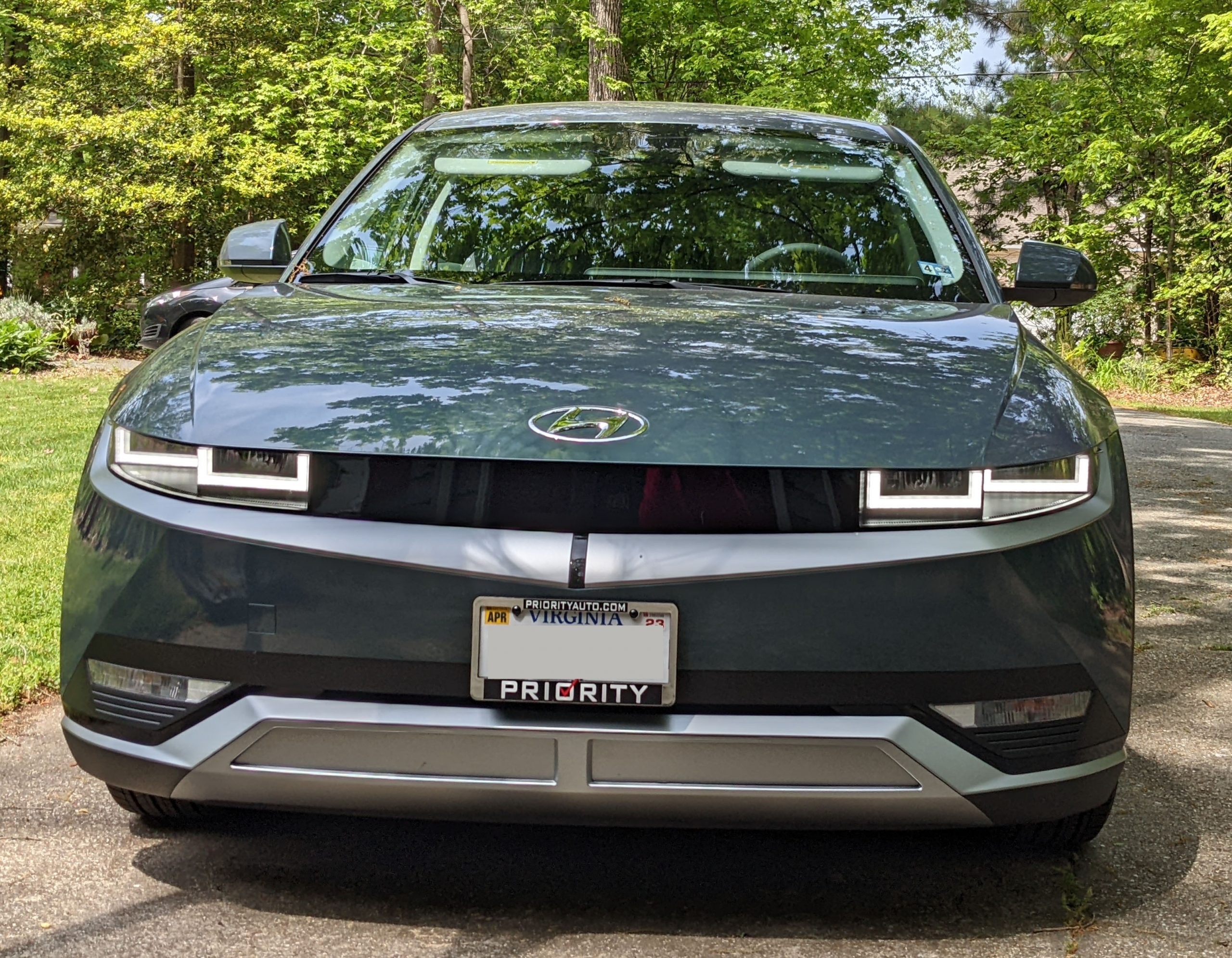 As I’ve gradually been building confidence in using my new Ioniq 5 electric vehicle, I’ve been expanding the ranges that I travel with the car. From the start, the car was used regularly for a 15 mile round trip to work and random errands around town. Then, I made a cross-state single-day round trip where I had to charge at a distant station both on my way out and way back. Finally, I took an overnight trip in-state that required two charges on the way out, added some serendipitous hotel charging, and a charge on the way home.

It was time to spread my wings and leave the state. I needed to drive from the Hampton Virginia area to the Detroit Michigan area to attend a family activity and to bring back some heirlooms and childhood treasures from my wife’s family. I fired up A Better Route Planner and typed in my destination. One of the tricks I use is to specify a round trip back home so that I don’t end up at the destination with a very low battery. Out of caution, I then researched each charger that ABRP had chosen on PlugShare to confirm that the stations were operational. I then bookmarked each station’s location in the Waze app on my phone for in-trip navigation. Alas, I picked the wrong Sheetz station in one case and had to drive another 6 miles to the other side of town to get to the Sheetz that had the charger. Since I needed to use the same charger on my return trip, I carefully updated my bookmark in Waze.

I saved the ABRP route with distances, expected battery levels and required charging times to an Excel spreadsheet that I printed for use in the car. In every case I arrived at waypoints with a bit more charge than ABRP predicted – which gave me a lot of confidence that I wouldn’t fall short of reaching a station.

I had to charge 4 times in each direction plus once in Detroit for driving around town, taking about 20 minutes each time. When this lined up with a meal, the time was not a problem. When it didn’t, I still got a snack and used the restroom but had some waiting time. All of the charging stations worked fine. A couple didn’t give me the full rated speed and took an additional 5 minutes. The waypoint near Cleveland is where I spent the night and split the drive into two days with the Detroit end of the trips being about 25% of the distance and the Hampton end being about 75% of the distance.

This 20 minute typical charge time is on the very fast end for electric vehicles. My Hyundai Ioniq 5 and its Kia EV6 and Genesis GV60 siblings (plus the upcoming Ioniq 6) have an 800 volt system that can charge from 10-80% battery in 18 minutes in ideal circumstances. It maxes out at 230 kW when using a 350 kW charging station. Even on a 150 kW station the car will get 170 kW, but that will make the car take longer to charge than if it could get the desired 230 kW. There are a few other models that currently can charge at a similar speed, but most existing cars will be slower and almost none will be faster. See this video from Out of Spec Reviews for a longer discussion on the topic.

Protip: If you own an EV that charges at 150kw or slower (as do the majority of the current models including the ID-4, Mach-E, Leaf and Bolt) the 350kw chargers won’t give you any speed benefit. Please, when possible, leave the high speed chargers for cars that can benefit from the higher power. If you own a fast charging car, please be polite when educating the owners of the slower charging cars. See this article for a list of current fast charging cars.

I did one charge session each way at a turnpike service plaza (Ohio Turnpike near Toledo), which was very nice. I saw chargers being installed at several other plazas. Those will really improve charging convenience on trips like this.

Electrify America was updating all of its software during the trip. All of the chargers worked without logging into your account. So, they were free. Yes, my 1600 mile trip cost me $0.00 for fuel! It would also have been free for me if they were operating normally since I have 2 years of free charging included with my car. My first world problem with the non-logging-in is that I didn’t get emailed details about each charging session and sometimes couldn’t read all of the time/kWh/non-free cost numbers on the screen that I’m tracking in my charging history spreadsheet.

For the return trip, I was comfortable enough to call an audible, mid-trip, and divert around DC evening rush hour traffic. This resulted in replacing the stop at the nice station in Stafford VA with a very cramped and hard to maneuver one in Haymarket VA. The design of the Haymarket installation had the charging boxes facing alternate directions between parking spots. That can make it very difficult to use many of the chargers as the cables may not reach to a specific model car’s charging port. I had to back in at about a 10 degree angle and my left rear corner almost brushing the charger to have enough reach to go across the rear window to the port on the rear passenger side (there were metal posts to prevent me from just pulling through half way). Further, the Walmart had used some of the maneuvering space in front of the chargers to put large truck containers and some other barriers making this backing operation more difficult. It took three tries to get lined up well enough to get the cable plugged in. And it was raining pretty hard.

Charging an EV in the rain is perfectly safe, but really sucks. I had a rain coat on, but still got completely soaked. This was partly from getting out and trying to connect the plug three times and partly from the hike to the Walmart entrance and back to use the restroom. I have yet to use an EV charging station with a roof over it – like is standard for gas cars. At least I can sit inside once I’m hooked up and monitor my charge from either inside the car or via my phone app. Thankfully, only my last charge session of the trip had this rain problem.

Most newer cars, EV or not, have a variety of driving assistance features available. On my Ioniq 5 these included blind spot alerts, adaptive cruise control, and automatic lane keeping. I still had to stay alert and keep my eye on traffic, but these significantly reduced the effort of interstate driving and kept me more focused and less stressed.

A fun part of the trip was that I chatted with lots of other EV owners. Saw a couple of VW ID-4s, a Rivian, a couple of Ford Mach-Es, a Kona, and a BMW. Surprisingly I didn’t see another Ioniq 5 or any of its sibling Kia/Genesis models. I normally see lots of Ioniq 5s at my local EA charger.

Electrify America recently put out a press release with its vision for charging in the future, which is mostly exciting. They showed roofed stations with better charging cable management to reach the charging port. See this video from Out of Spec Dave for an overview and his thoughts.